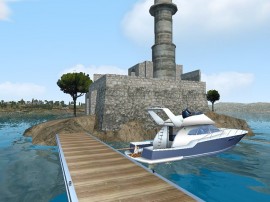 Do you feel excited whenever the discussion between friends is focused upon sea and boats? Do you like to spend as much time as possible on the water bodies and you never miss a chance to be on a boat or yacht? If the answer to all these questions is yes, then you are definitely going to love Virtual Sailor, software that lets you be as close to sea and your boat, even submarine, as possible through simulation. So much was the craze and popularity of the first edition of Virtual Sailor that since then, there have been seven editions so far, each new program being a step ahead of the earlier one.

Virtual Sailor was developed by llan Papiani as a ship simulator and it is available in both single player as well as multiplayer mode. It is a Windows based system and the latest version called Virtual Sailor 7 was released in January 2007 while there have been many minor releases since 1999 when Virtual Sailor was first released. If you are thrilled by the idea of naval simulation that includes different vessels, even a submarine, this is a game that you would love. Players have the liberty to create marine animals, small boats, and even the ambience to share with other players playing the simulator.


There are many attractive features of this program such as graphics that simulate accurate waves as they take place in nature both above and below the water surface making landscape area very photo realistic.. This is not all, as the dynamics of both kinds of boats are included; the sail boat and the motor boat are just as real. You get to see a diverse marine life, and surprisingly, you get a chance to add to this diversity depending upon your imagination and creativity. You can adjust the weather conditions in the game and also the sea conditions both during the day and also night.

It is integrated with the latest technology of DirectX9 that are available in 3D graphics. Due to this we are able to have multi- players and dynamic sound effects. They are the games which have advance themes and very simple to use in dynamic virtual environment. Since these have 3D instrument panel for all their sail boats, you can feel it as very interactive while playing. The virtual ambience is so realistic that at times it looks like you are watching a video on You Tube.

How to play the game?


Virtual sailor game can be played online with other players where you can take part in virtual racing events. This game is so amazing because it allows one to immerse in a sea environment without going to sea.

Is there going to be Virtual Sailor 8?

Since 2007, there has been no new version of the program and the developers have instead focused their attention on vehicle simulator, an addition that is backwards compatible with Virtual sailor. There is no information on development of virtual sailor 8.